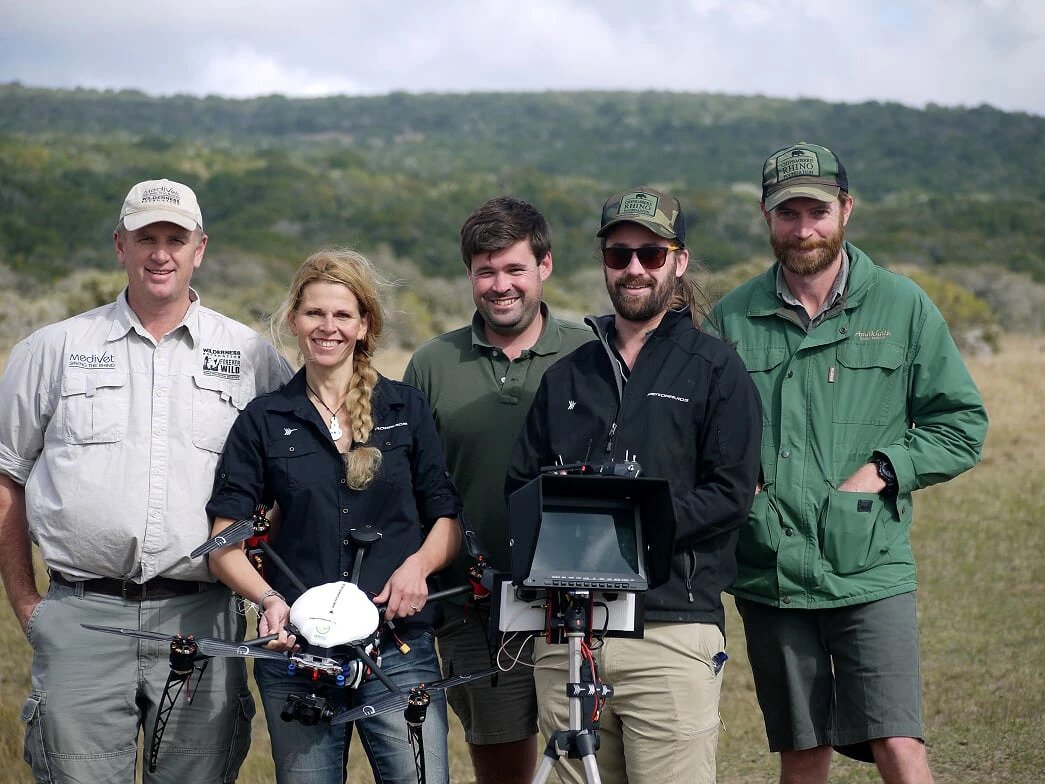 On Saturday 30 July 2018 Linda Bulk, director of Raglan (New Zealand) based drone company Aeronavics, and Hadley Boks-Wilson, Flight Engineer, took off to South Africa. Some 18 months earlier they were approached by Sarah Jones from the also Raglan based charitable trust ‘Tusk and Horn Wildlife Trust’ – active supporters of rhino conservation.

Sarah back then had just returned from a trip to South Africa that she had undertaken with Peter Eastwood from the Auckland based charitable trust ‘Tanglewood Foundation’. During this trip they had met with world renown wildlife vet and rhino specialist Dr William Fowlds, famous for his work in rhino conservation and rehabilitation.

In 2012 William and his team managed to save their very first rhino from a certain death, after having fallen victim to a vicious poaching attack - making headlines worldwide and propelling him into instant worldwide fame. A position he never aspired to, but which he reluctantly accepted in his quest to raise support for the fight against the soaring rhino poaching crisis.

Sarah and Peter spent some time with William in the field, and in one instance witnessed how he deployed a drone to locate a rhino. William explained how he believed that drone technology could be highly useful for conservation work, especially if it could provide night vision to support security teams in patrolling reserves. But this particular drone didn’t have this capability, and resources were limited.

Knowing of Aeronavics right in her hometown Raglan, Sarah planned to visit them on her return to discuss options.

“When Sarah contacted us we instantly wanted to help” Linda said.

“Both Rob (Rob Brouwer, co-director) and I were deeply moved by her relay of what was going on in South Africa, and by the gruesome imagery she showed us of the unimaginable suffering inflicted on this magnificent species by humankind.”

It took 18 months to pull it off, developing a number of prototypes before ending up with one they believed would do the job. Both Sarah’s and Peter’s trusts also helped with some of the expenses, including plane tickets for Flight Engineer Hadley, and William’s foundation ARCC (African Rhino Conservation Collaboration) funded the thermal camera.

“The weeks leading up to departure had been crazy busy,” Linda said.

“Especially with Hadley spending countless hours of his own time into perfecting the prototype, which he named ‘Rhino Bavi’. It is a quad rotor model which flies for about 45 minutes and can withstand a high degree of wind, common especially at this time of year in the region of South Africa it will be deployed. It can comfortably fly several kilometres away without losing contact with the radio and video controls, and carries a normal camera and a thermal camera side by side. It has several safety features and can be pre-programmed to fly autonomous missions to assist daily patrols, as well as flown manually to wherever necessary.”

On arrival in Port Elizabeth Linda and Hadley were picked up by William, who invited them to join a scheduled “rhino procedure”.

They drove with the rest of the team to a nearby reserve, where William explained they would dehorn some rhinos as a preventative measure against poaching.

“Rhino horn,” he said “exists of keratin, the same substance as human’s finger/toe nails, and grows back if cut above the growth plate. Reserve owners hope that by cutting the horns off, there will be less incentive for poachers to strike. Unfortunately, this is by no means a guarantee. With rhino horn being worth more than its weight in gold on the black market, even a few centimetres of remaining horn have proven to be worthwhile for poachers to slash the animals’ faces open.”

The procedure brought Linda to tears she explained, “it was heart wrenching to see this magnificent creature lying helplessly on the ground, sedated but aware, as his pride and glory, his defining feature, was sawn of his head. You can just imagine their terror as the penetrating noise of a chainsaw is cutting into their horn just inches away from their face, followed by a grinder to remove the remainder. But at least this doesn’t actually hurt them physically, unlike the brutal force poachers apply as they savage their faces with axes. And I was super impressed with William and his team, with their confidence, kindness and skill. It is just so sad that it’s necessary”.

The rhino horn is mostly trafficked into Asian countries like Vietnam and China, where they are believed to have healing powers and are used in traditional medicine, or simply acquired as a status symbol. Poaching incidents take place every day, with over a 1 000 per year in South Africa alone.

The most recent studies and census estimate that there are roughly 18,000 southern white rhino and 5500 black rhino left in Africa, including their subspecies, but as of 2018 the actual numbers are likely to be fewer than this. The northern white rhino subspecies has been reduced to just two living in East Africa. The three species of rhino in Asia are also threatened by the demand for rhino horn. As of the end of 2017 there are an estimated 3333 greater one-horned rhino (Indian rhino), and around 67 of the Javan species, and officially less than 100 (but estimated as few as 30) rhinos of the Sumatran species left in the wild.

If nothing changes we could see this iconic species go extinct, in the wild, in as little as 20 years. A species that has roamed this planet for over 50 million years.

“This is much bigger than just animal cruelty and human ignorance and greed” Linda said.

“William wrote an e-book about his first poaching incident titled ‘POACHED’, and in here he says: 'If we are not able to save the rhino from extinction, this flagship species that’s larger than life, what hope do we have of saving the rest?'. And that’s just it - besides a tragedy in itself, it is a symbol of the state of the world and the extent of human destruction. On the other hand, if we CAN save them from extinction, and I am convinced we can, they can be a symbol of hope. A symbol of inspiration and empowerment”.

Strongly motivated and with sense of purpose, Linda and Hadley worked throughout the week with the anti-poaching unit (APU) of Amakhala, the Fowlds family’s game reserve. In between training sessions and practise flights they were treated to some magnificent game drives on the reserve, viewing all sorts of wildlife from elephants to lions to giraffes, rhinos, kudus, antelopes, jackals, zebras, wildebeest, hartebeest, ostriches, plentiful warthogs, all sorts of birds and stunning scenery.

“The APU team already had experience with smaller drones” Linda said, “which made it a lot easier to train them. Besides, they were highly professional, competent and committed. Great guys, it was a joy to work with them. We did several flights every day, manually and pre-programmed, including night flights and long range. All went well. We identified some potential improvements and will undoubtedly identify more as the team deploys the system throughout the next couple of months, but as is it is already a useful tool.

“We now have to strategize how to make it feasible to deploy this technology on a wide scale.” Linda continued.

“The system we delivered is much more powerful and fit for purpose than the smaller cheaper drones you see en mass on the market, but this comes at a cost. How can we a) further improve on capability, and b) reduce cost. Even as a non-profit offering the cost are currently too high. We might have to look at a bit of an industry collaboration to achieve this, I will explore this.

“This week we have contributed in a small way. I am proud of the performance of the drone even though we can make improvements, and proud of the caring nature of our team as everyone was - and is - very involved and emotionally invested. But it is little in comparison to the guys (male and female) we met this week at the frontline, who I respect immensely. I personally returned a richer person, and feel indebted to do more, contribute more, to help save the rhinos and all they represent. And this I will do, with Aeronavics and outside. I invite anyone who feels a call to action to contact me or any of the organizations mentioned, to unify intent. Thank you," Linda said.