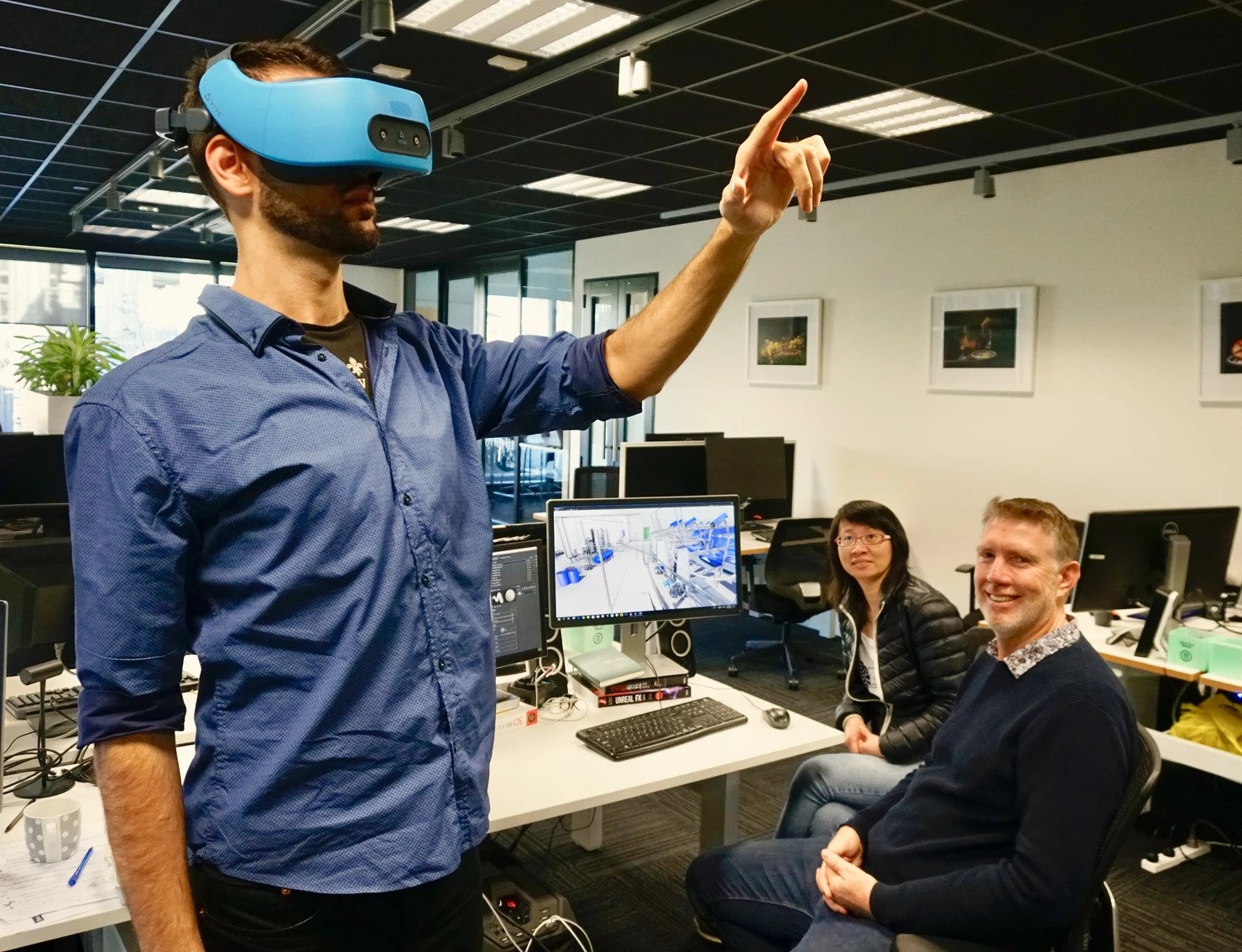 From football, to hardware, to film, to virtual and augmented reality software. It’s quite the journey and one that Pepper Creative founder and director Lance Bauerfeind never planned, but he’s happy with how things have worked out.

And with clients from all around the world, he sure has a reason to be.

Pepper Creative - named after the family dog – is based in Hamilton and has been in the content creation industry for more than 10 years. The high-tech business creates advanced scenarios-based industry training, real-time maintenance solutions and content for sales and marketing using virtual and augmented reality solutions.

Lance and his team have clients as far as America and Sweden. He said doing business with overseas companies had it challenges, but they were mainly with communication and understanding not processes, as there are plenty of online solutions that allow them to work happily from the Waikato.

The company started as a solo project when Lance left his job as a manager at a production company and dove into Pepper Creative full-time in 2009.

But that’s not where his journey began.

About 18 years ago, Lance was assistant manager of a building department in a hardware store. Before that, football was his life.

“I put it down to not having a plan. I loved football, all of my life was about football. I played until I was 26, met my wife, got married, had children, and got a job at the hardware store and thought I’d work my way up.”

That’s when he acquired a shoulder injury and had to take a year off work on ACC.

Lance saw that year as an opportunity.

“I thought about what I always wanted to do, and that was film. I had a look around, AUT (Auckland University of Technology) had a one-year course, so I did that.”

He said it wasn’t easy, but something he had to do.

After completing his graduate diploma in multimedia at AUT, Lance went into video production and managed a company for a number of years before going out on his own.

And until four years ago he had been quite happy trucking long with business as usual with the help of a few employees and the occasional contractors, when he landed a major project and needed to find office space.

“When I was still on my own, contracting and doing corporate videos… I was working out of home and I hated it.”

That’s when he came across Soda Inc, a Hamilton-based business incubator, which works with founders from all industry sectors and also provides co-working office space.

“I was looking for some office space. The idea of co-working space that I could move straight into for reasonable money was great. I’ve been with them four years now and I’ve been able to utilise their connections and join some of their training days.

“When the e-learning project came up we grew to 14. Some of those were full-time employees, some were part-time contractors.”

He now works with a team of six with room to grow a little bit more, he said.

“It’s a bit of a league of nations; we have two New Zealanders, two Sri Lankans, one Korean and one Chinese.

“I find it pretty difficult to find people with the skill set that we need, our latest employee was from South Korea. It’s about attracting those people into the Waikato.

“For them it is about opportunities, not only workwise but for their families. Escaping the rat-race and very long hours, enabling them to spend more time with their families and providing opportunities for them in a country with a very good reputation in the world. They like the Waikato lifestyle without the Auckland traffic. After all, they have come from big cities,” he said.

Lance said that while they specialize in VR and AR, Pepper Creative was always growing and changing as technology evolved.

“I don’t want to bolt us down to being only a AR/VR company. Technology is changing with the time and I’ve just been in the US at a big augmented expo and it’s amazing to see how much technology is changing. So, I don’t want to put a label on what we do exactly because there’s always new ways of doing things – there’s holograms and all that kind of stuff coming through.

“When you’re in video, especially here in New Zealand, you have to be a jack of all trades. You need to be able to animate and to do graphics and everything.”

Which is why when Lance first started he ended up building a team and developing content and just as he was finishing that off, virtual reality became more prominent.

“And one of my guys, James, was building his own little project in VR, and I said, ‘well, let’s have a look at it’. And from there we had a bit of a demo and just kind of started showing it around and engaging some interest and picked up a little bit of work from it and slowly over the last couple of years we’ve basically moved ourselves into that space.”

He said anyone that’s seen their work, has seen “the old cow shed”.

“We’ve developed a VR cow shed and that was building on an idea after we’d just done some training where we’d built a training emulator for DeLaval and we’d built a whole lot of assets.

“We just thought this would be a really good way for trainees to be able to learn how to program one of their automated wash systems. So, that’s what we built it around, functional wise it’s really simple, but graphic quality wise it was pretty good.”

From there, they ended up doing a VR fire warden training project for mobile and have gone on to do a number of different projects.

Lance said the fire warden project was almost like a game.

“It was about training them to clear out the space, getting them to have an inspection outside after it was clear and that kind of thing. We planted a guy smoking by the gas cylinders, things like that.”

He said each client was different and that was a good thing because it helped his team push through boundaries in technology.

“Fundamentally, at this point, it’s around building bespoke products for clients. They may have an idea of particular training they need and we can then sit down with them and turn it into a project. It can take up to two to three months to create. Based on what their requirements are, we build them an application that will work for them and we can integrate that into their existing systems.”

Lance said the idea of moving into VR was around needing to stay out on the edge.

“I was over at the world expo and they were talking about the future and they’ve just started trialing 5G on phones, here in New Zealand, so I’ve seen a couple of examples of VR being computed on the cloud and delivered through 5G to devices.

“What that means is, with VR it’s being delivered at real time through a computer – whether that’s your smart phone, a head set, or a head set plugged into a powerful computer. That computing power determines how realistic the quality, the resolution of the graphics and that sort of thing are – so at present you need a pretty powerful computer to get all of that stuff. So that means with some of the training, you’d be limited to an office space and if we go and put it on a mobile we’d have to dumb it down.”

But, he said, there’s a new device coming out at the beginning of the year that is a mobile head set, so you don’t need computers and it’s far better than a smart phone.

“Because of all those computing issues it’s quite a technical thing, but with the computing done on the cloud, delivered through the internet with no need for you to have a bulky head thing, then to me, that’s the future.”

He said people had been saying VR was struggling, or the out take wasn’t there.

“For consumers that might be true – but for the industry, it’s not. In industry, they can see that they can save some money, help with compliance, and it’s good for training.

“The future is wearable, the VR will be processed in the cloud and then delivered to your device.”

But Pepper Creative is focused on the software that will go into that device – they aren’t hardware orientated.

Lance said one of the main questions they get asked was, “where’s the research that proves that VR provides better training results than writing on a piece of paper?”

“What we’re seeing now is, we are more and more are being approached by companies asking for these VR trainings. They are starting to realise there is something in this, the turn-around has happened – we used to approach companies, now they are coming to us.”

SODA Inc is a Hamilton-based business incubator, who works with founders from all industry sectors to create a customised program with the help and support they need and go to market on a case-by-case basis, both locally and internationally, to find the perfect advisor for them to work with.