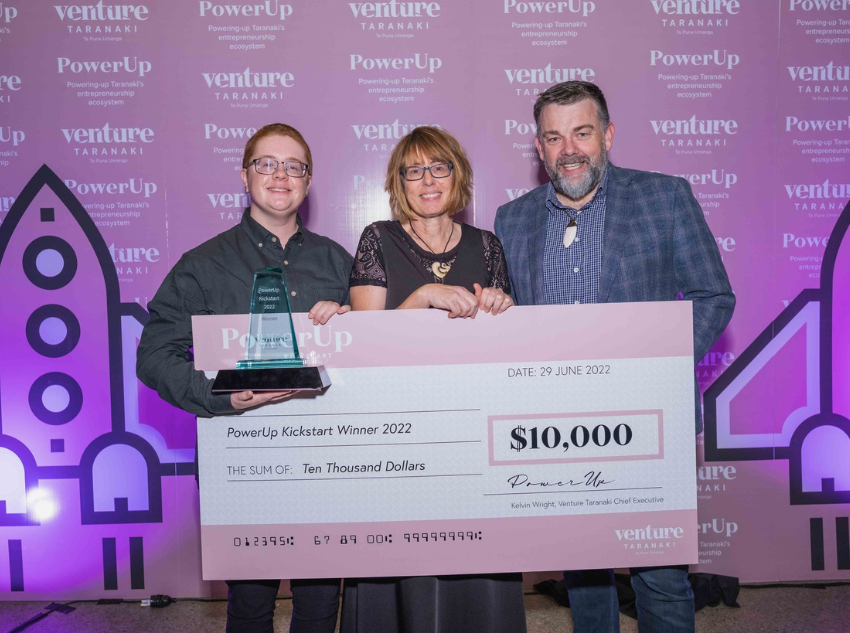 Frey and Pam Livingston and their startup Tokaora Diagnostics have taken out the top spot in the 2022 PowerUp Kickstart Finals Night, and have won $10,000 to help take their idea to the next level.

The mother and son duo are developing a type of RAT test for the sheep and cow disease facial eczema that will enable better management of a disease that costs the New Zealand economy almost a quarter of a billion dollars every year.

"In my Master’s degree at Victoria University I discovered a new way to test for facial eczema. We’re hoping this will be a key tool in reducing the death toll and production losses from this horrible disease," says 24-year-old Frey.

"We’re absolutely thrilled about winning the competition. Being a finalist was fantastic and we can’t speak highly enough about our assigned mentor, Bridgit Hawkins. We are now doing a one-year R&D project to produce a prototype which is running to schedule. And, we have started to focus on what happens after that when we have a saleable product," says Pam.

From April to June the five finalists received tailored support to help them move forward with their idea. In conjunction with Soda Inc., support included $3,000 seed funding, one-on-one mentorship, and two months of co-working space access.

"As an aspiring new business, PowerUp Kickstart helped us to consider all business aspects in more depth. We learned that just because you have a great idea doesn’t mean someone is going to buy the product. We would definitely recommend PowerUp Kickstart. Like everything in this world - you don’t know what you don’t know," continues Pam.

Like the other finalists, Frey and Pam have invested a lot of time into their business idea over the last two months and the PowerUp Kickstart is just the beginning for Tokaora Diagnostics.

"I’m most looking forward to getting into the laboratory and getting down to the science, and the $10,000 will be of enormous help there," says Frey.

The finals night saw five finalists pitch their ideas to a judging panel and live audience of 250 people.

Pam and Frey from Tokaora Diagnostics weren’t the only winners on the night. Paul Gledhill and Sophia Joy and their startup Surface Swimgear took out the WITT People’s Choice Award, winning $2,000 to use towards their idea.

"The finals night presents an opportunity to celebrate the strength of our Taranaki entrepreneurs as well as shining a light on and encouraging others to pursue that ‘crazy idea’. Innovation is critical to the region’s long-term resilience, and what we heard tonight makes me extremely excited for what’s to come," says Natacha Dunn, Venture Taranaki GM Enterprise.

"I would like to congratulate all of our finalists along with our other participants that went through PowerUp Kickstart; it takes courage to put yourself and idea out there and countless hours of hard mahi," says Natacha.

The other four PowerUp Kickstart finalists are:

PowerUp Kickstart is a joint collaboration between Venture Taranaki and Soda to drive growth and innovation in the Taranaki.