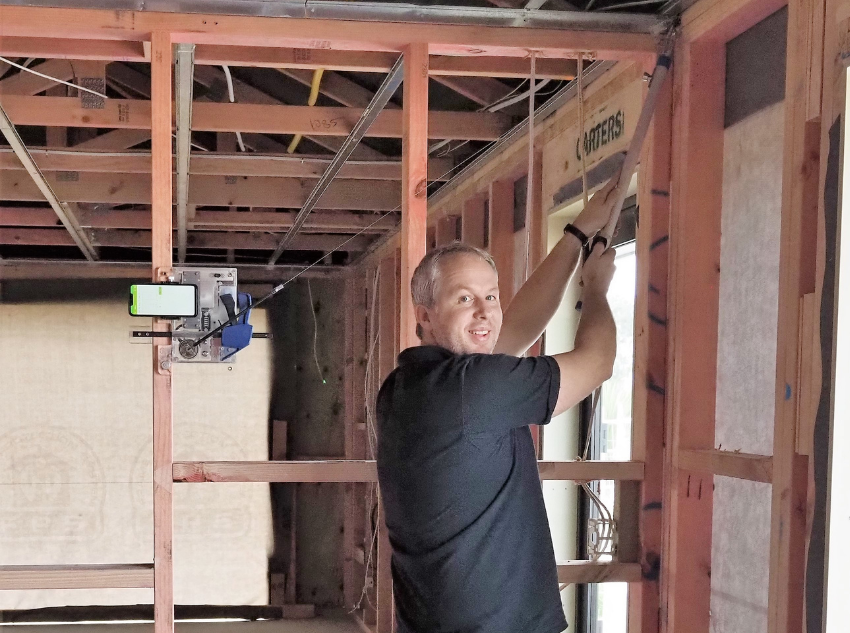 Christopher Staal’s start-up – EC8 – has developed technology to supply pre-cut plasterboard to building sites, reducing the overall build time of a residential house by two days and decreasing waste by up to 30 per cent.

With 34,000 houses built annually in New Zealand and more than one million built each year in the United States, EC8 has enormous potential.

After moving back to New Zealand with his wife and young family in 2018, Staal was renovating their 1940’s character home in Hamilton when he realised that the plasterboard process could be improved.

“Builders have been putting up plasterboard the similar way for around 60 years. It can be very repetitive as involves measuring three times – once for quantity survey, once on the wall and again marking out each sheet,” he explains.

“I started tinkering with my 3D printers, CNC gear and software development, to see how I could apply some automated steps and processes. EC8 is designed to build houses faster, with less waste.”

Staal has created a tool which can digitally measure wall dimensions as a 2D model in less than two minutes via an easy-to-use app. The builder simply attaches the device to the wall and within two minutes they have a digital copy of the wall. Builders can send the order directly to the factory to be produced before the pre-cut plasterboard is delivered directly to building sites.

He hasn’t just created the technology and systems, Staal also designed and built a custom CNC machine – 22 metres in length – which can cut six metre sheets of plasterboard.

“I’ve always been creative. When I was younger, I was often tinkering and building things in the garage,” says Staal.

With a background in engineering, commerce and finance, Staal has an impressive raft of skills which have helped him get to this stage in his entrepreneurial journey. But, like many entrepreneurs, he needed a bit of extra help.

Staal first came across Hamilton based business growth ecosystem Soda when he placed third in one of Soda’s seed grant competitions. He has since completed Soda’s customised start-up programme, LIFT, which saw him matched with industry expert and mentor John Macaskill-Smith.

“Soda has made a huge difference by connecting me with the right people to help me focus and push EC8 in the right direction. My mentor John totally understands me and is passionate about helping entrepreneurs. He has helped me refine our target market and work out the best commercial model for EC8,” says Staal.

EC8 is currently in its prototype stage, trialling its technology and preparing for pre-production. The next stage will be raising capital and selling the technology and systems to large manufacturers.

His biggest challenge as an entrepreneur?

“Time! I’m doing it all myself which has been hard. EC8 has been awarded a Callaghan Innovation Grant, so I’m lucky that I get to work fulltime on EC8.”